NOTE: This is still a beta version. Though it runs quite stable since some months, it has not been tested with many language servers. Moreover there is a good amount of documentation missing. 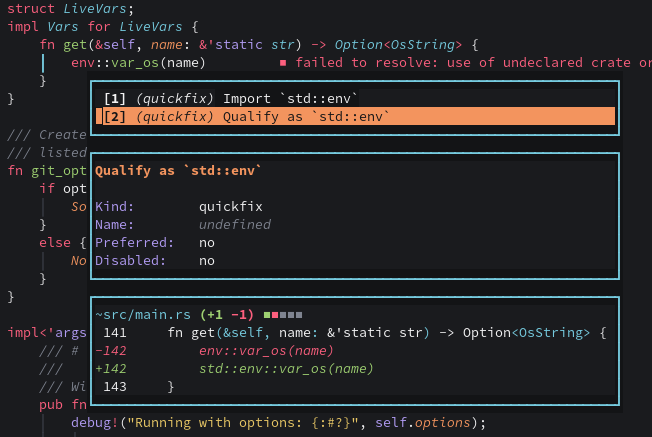 This plugin provides a handy pop-up menu for code actions. Its key competence is to provide the user with more detailed insights for each available code action. Such include meta data as well as a preview diff for certain types of actions. These includes:

The experience for all these features might vary according to the implementation of the used language server. Especially for the diff view, do some servers still use the old code action data scheme from older Language Server Protocol versions which include less information for the clients. However this plugin tries to inspect those actions more deeply and try to parse as much information as possible.

This plugin is just a menu for code actions. Nothing more and nothing less. It is a minimal plugin that focuses on one single task. It tries to be a contrast to other plugins which also provide a code action menu but being more advanced a do not provide any other functionality.

Install the plugin with your favorite manager tool. Here is an example using packer.nvim:

It is recommended to use the nvim-lspconfig plugin to attach language clients to your buffers.

Furthermore is quite handy to also use the nvim-lightbulb plugin. It will automatically inform the user visually if any code actions are available for the current cursor location.

Please note that LSP and other features for this plugin require you to have at least v0.5.0 of NeoVim.

The plugin has a single command only: CodeActionMenu This command works in normal mode, as well as visual mode. For the latter mode it will switch to the code range mode automatically. The menu can be navigated as usual with j and k. The docked windows will always display further information for the currently selected action. Hitting <CR> will execute the currently selected code action. Alternatively you can type the number in front of the list entry to jump directly to this action and apply it right away. In any case the menu window will close itself. If you want to manually close the window without selecting an action, just hit <Esc> or q.

The plugin allows for a bunch of customization. While there is no classic configuration (yet) it can be adapted by using traditional (Neo)Vim techniques. Each part of the menu uses its own filetype. This gets used to separate the logic implementation in Lua from other parts like highlighting, buffer options and mappings. As beautiful side effect is that the user can do so too. This means you can just define some after/{ftplugin,syntax}/code-action-menu-{menu,details,diff,warning}.{vim,lua} files yourself and get the full power of customization.

At the current state of documentation I must redirect you to the syntax files in the source code of the plugin to get a list of available highlight groups. The user can simply overwrite any of the default mappings to his liking.

The following global variables can be set to alternate the appearance of the windows:

Disable parts of the UI

The following global variables can be set to disable parts of the user interface: